Today let’s talk about changes, in one of two ways.  Either tell us what you’d most like to see change about diabetes, in any way.  This can be management tools, devices, medications, people’s perceptions, your own feelings – anything at all that you feel could use changing.  OR reflect back on some changes you or your loved one has seen or been through since being diagnosed with diabetes.  Were they expected or did they surprise you? 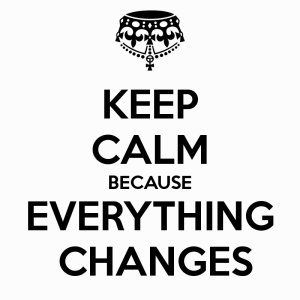 The theme of changes has me going on a trip down memory lane. I’ve had type 1 diabetes for 21 years, and there are some people in the diabetes community who have known me almost that entire time. I went to diabetes camp the summer after I was diagnosed, and I still know people from that first summer (in fact, I interviewed one of them — Clare Rosenfeld Evans — in the latest issue of Diabetes Forecast!).

Twenty one years is a long time. There are not many things that I have been doing longer than that. Although anytime I’m around people who have had diabetes for forty, fifty, sixty (etc. etc.) years, I always find myself sheepishly chastising myself with “You know nothing, Allison!” ala Game of Thrones.

Anyway, a lot has changed since I was a wee little lass, getting diagnosed with diabetes. Since most of you didn’t know me then, I was diagnosed on January 27, 1994. Yes, I know the exact date because we have celebra — well, marked the occasion — every year since then. So it’s an easy date to remember. When I was diagnosed, I was on Regular and NPH insulin, but Regular only last for  a year (maybe two?) before Humalog became the new It Drug. I swear, Humalog is to Regular what Smart Insulin is to… everything. I mean, you’d think they’d cured diabetes. It was supposed to be this saving grace for all mankind.

Not that I’m bitter or anything.

Anyway, a few years after that, in the summer of 2000, I was approaching FIVE injections a day. My doctor gave me the ultimatum of a lunchtime shot at school (Nooooooooo!) or the insulin pump. He was a huge advocate of insulin pumps and thought it would be great if I went on one, even though I was completely against it. I had a couple friends from camp who were on the pump but I didn’t want anything attached me.

“I don’t want to be reminded that I have diabetes!”

Right, because diabetes is just so easy to forget.

I finally gave in because taking a shot at school somehow equated in my 15-year-old brain as the ABSOLUTE WORST EVER. I’m still not sure why or how I came to that conclusion but there you go.

First I went on a Medtronic 508. It pretty much did nothing except give you the basal rate and allow you to take a bolus, but it didn’t tell you how much to take, it didn’t connect to a glucose meter and it certainly didn’t have CGM capabilities because that wasn’t even a thing yet. Yeah, that’s right, you little newbie whippersnappers. We didn’t even have a bolus wizard calculator!

Back in my day, we had to bolus in the snow, uphill, both ways!

That lasted for a couple of years, and then the Medtronic 522/722 came out and that had the bolus wizard calculator, the saving grace of everyone who can barely add single digits together. The Paradigm came out awhile after that which had the CGM capability, and that’s when I finally started using a continuous glucose monitor. Because why not, right?

Well, I’ll tell you why not! It was a piece of crap. A stupid, horrible piece of technology that lulled you into a false sense of security and then smacked you with reality when you least expected it (usually at 3 in the morning). So that didn’t last very long. In fact, I didn’t even use the CGM for the most part. I didn’t use a CGM — a Dexcom — until much later, when I went on the Omnipod.

Going on the Omnipod actually happened after I decided to go Lantus. Well, deciding to go on Lantus makes it sound planned. What really happened is that my Medtronic Paradigm pump kicked the bucket while I was at a wedding in Phoenix in April 2012. Luckily, my brother-in-law is a doctor, and despite also being the father of the bride (!), he kindly called the local Walgreens a mile away so that I could, you know, not die.

Lantus for a couple days while I waited for a new pump turned into a week off. And then it turned into “Well, when the bottle is empty, I already opened it.” Which then became “until my next A1C.” Then I finally just up and admitted that I thought pumps were stupid and I WAS NEVER GOING BACK.

Okay, that’s a lie. But I was pretty happy not being on a pump. My pump sabbatical lasted until I remembered all the reasons I don’t like shots (they hurt, they’re inflexible, you have to remember to bring your stuff with you all the time). Of course, trying to decide between shots and a pump was sort of like choosing between death by poison and death by firing squad. End result is the same, they’re both pretty painful and… do I really gotta?

So I took some time to investigate my options with pumps and I settled on Omnipod in August 2013. It seemed the closest to shots because you didn’t have to attach a pump anywhere. What is ironic is that for the longest time I really didn’t like the Omnipod. I thought it was really big and couldn’t figure out why you would want to wear that on your skin. It seemed like it would so heavy and uncomfortable. I also thought the sales reps at the diabetes conferences were super rude and aggressive. But lo and behold, it actually worked out the best for me. I’m marking two years on Omnipod in August!

On top of the traditional methods of managing type 1 diabetes — read: insulin — I also tried a few other therapies. The first was Symlin, which I tried for about a month during my junior year in college. But I realized I hated that it was another shot, I hated that I couldn’t figure out how to properly adjust my insulin at meals, and I hated having low blood sugars that lasted forty-five minutes. The next treatment I tried was metformin, and that was in 2010. That last for a few months. It helped me take less basal insulin, but it also meant swallowing a horse pill which I was not a fan of. So that didn’t last long either. Then in June 2014, I went on Victoza. I’m still on it, although I’ve had some digestive issues because of how it slows down digestion so I have to be careful with how much I take. I’m not sure how common the side effect is, but I get enough of a benefit on it to keep taking it.

That’s a lot of change, right? Maybe, maybe not. Obviously people who have had diabetes even longer have seen even more change, and most of these changes aren’t huge leaps and bounds in progress. Part of that has to do with the fact that diabetes research and technology approvals just aren’t what they could be. Yes, there’s safety but Europe approves a lot more devices and medications a lot faster than we do in the United States and that’s really frustrating. I want to think of the U.S. as being innovative and cutting-edge, but that just isn’t true in the grand scheme of things. Twenty-one years and only four insulin pump upgrade/changes? That seems pretty pathetic. I’ve had like 10 different cell phones in half that time!

Hopefully the next 21 years will see a lot more progress, and a lot faster. In fact, progressing all the way to a cure would be mighty fine.

My name is Allison Nimlos. I'm a twentysomething type 1 PWD living in Minneapolis with my husband. I wear an Omnipod insulin pump and Dexcom CGM.

Disclaimer: But don't go expecting any medical advice, mmkay?This is all for fun.

Error: Twitter did not respond. Please wait a few minutes and refresh this page.